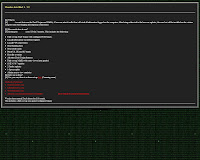 Since 100% transparency doesn't exist in any given market no matter how networked and open its stakeholders are, Cybecrime-as-a-Service (CaaS) in the underground marketplace went mainstream with the introduction of- the 76service -- now available in Winter and Spring editions -- followed by a flood of copycats monetizing commodity services on the foundations of proprietary underground tools.

Originally launched as an invite only service where only trusted individuals would be able to take advantage of the malicious economies of scale concept, in August, 2008 copycats ruined the proprietary model of the 76service by tweaking the service and converging it with web malware exploitation kits of their choice. The output? Near real-time access to freshly harvested financial data, which when combined with their aggressive price cutting once again lowers down the entry barriers into this underground market segment.

Start from the basics. Intellectual property theft in the underground marketplace has been a fact for over an year now, with proprietary web malware exploitation kits leaking to the average cybercriminals who after a brief process of re-branding and layout changing, include their very own copyright notice. Upon obtaining the kits for which they haven't a cent/eurocent, it would be fairly logical to assume that they can therefore charge as much as they want for offering on demand access to them, thereby undercutting the prices offered by the experienced market participants. IP theft in the underground marketplace equals a volume sales driven cash cow that messes up the basics of demand and supply that the experienced cybercriminals consciously or subconsciously follow.

Not only is IP theft a reality, but also, among the very latest Zeus crimeware for hire services is charging pocket money for extended periods of time :

"[Q] What is
[A] is a mix between the ZeuS Trojan and MalKit, A browser attack toolkit that will steal all information logged on the computer. After being redirected to the browser exploits, the zeus bot will be installed on the victims computer and start logging all outgoing connections.

[Q] How much does it cost?
[A] Hosting for costs $50 for 3 months. This includes the following:

Think cybercriminals in order to anticipate cybercriminals. Would a potential cybercriminal purchase a crimeware kit for a couple of thousand dollars, when they can either rent a managed crimeware service, or even buy a gigabyte worth of stolen E-banking data for any chosen country, collected during the last 30 days? I doubt so, and factual evidence on the increasing number of such services confirms the trend - in 2009 anything cybercrime will be outsourceable.