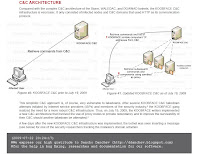 I'd like to thank the folks at TrendMicro for mentioning the message inserted by the Koobface gang (more love on a first-name basis from them) within their command and control infrastructure for nine days, greeting me for systematically kicking them out of their ISPs, and suspending their command and control domains, in a new report entitled The Heart of Koobface - C&C and Social Network Propagation:

"This simplistic C&C approach is, of course, very vulnerable to takedowns. After several KOOBFACE C&C takedown attempts initiated by Internet service providers (ISPs) and members of the security industry, the KOOBFACE gang realized the need for a more robust C&C infrastructure.

Thus, on July 19, 2009, the KOOBFACE writers implemented a new C&C architecture that involved the use of proxy nodes to provide redundancy and to improve the survivability of their C&C should another takedown be attempted. A few days after the new KOOBFACE C&C infrastructure was implemented, the botnet was seen inserting a message (see below) for one of the security researchers tracking the malware’s domain activities.

This message run lasted nine days from July 22 to July 30, 2009. Based on this incident, we can safely assume that the KOOBFACE gang has been monitoring blogs, articles, write-ups, and analyses about their handiwork and was probably also keeping tabs on the various solutions deployed to counter the botnet’s attacks. Second, these people were thus quick to act and fix their creation’s weaknesses, as evidenced by its change in infrastructure. Finally, the botnet’s creators were bold enough to send taunting messages to security researchers."

Having the Koobface gang kicked out of their ISPs in 48 hours through close cooperation with China's CERT; BlueConnex Ltd; PacificRack.com; Oc3 Networks & Web Solutions Llc; Telos-Solutions-AS/Telos Solutions LTD, resulted in a single command and control domain which was active and using the services of UKSERVERS-MNT (AS42831), 78.110.175.15 in particular. Simply put, the Koobface botnet and the hundreds of thousands of infected hosts were not just sitting ducks, but ducks who've fallen asleep in the middle of the hunting season.

It's important to point out that the company (UKSERVERS-MNT) on purposely lied that the customer has been taken offline, allowed the Koobface gang to access the server since the gang claimed "it's a compromised customer and needs to clean-up the mess", then on purposely stopped responding to the smoothly going data sharing process, thereby allowing the Koobface gang to put their contingency plan in place.

The bottom line - based on already published and to-be published assessments of this group's activities, the Koobface botnet appears to be only the tip of the iceberg for the Ali baba and the 40 thieves cybercrime enterprise -- a self-describing message included by the Koobface gang. Their activities also prove a point - a single cybercrime enterprise can efficiently and automatically dominate the entire Web 2.0 threatscape, if they want to.