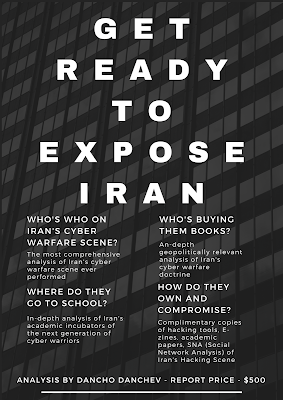 Dear blog readers, I would like to let you know, of my latest, publicly released report, on the topic of "Assessing The Computer Network Operation (CNO) Capabilities of the Islamic Republic of Iran", a comprehensive, 45 pages, assessment, of Iran's cyber warfare scene, featuring exclusive, never-published before, assessments of the country's cyber warfare doctrine, analysis of the country's academic incubators of the next generation of cyber warriors, featuring, an exclusive, social network analysis (SNA), of Iran's hacking scene.


The report, answers the following questions:
An excerpt from the Executive Summary:
"Today's growing cyber warfare arms race, prompts for systematic, structured, and multidisciplinary enriched processes to be utilized, in order to anticipate/neutralize and properly attribute an adversary's strategic, tactical and operational Computer Network Operation (CNO) capabilities, so that an adequate response can be formulated and executed on the basis of a factual research answering some of the most relevant questions in the 'fifth domain' of warfare - who are our adversaries, what are they up to, when are they going to launch an attack against us, how exactly are they going to launch it, and what are they going to target first?

This qualitative analysis (45 pages) seeks to assess the Computer Network Operations (CNO) of Islamic Republic of Iran, through the prism of the adversary's understanding of Tactics, Techniques and Procedures (TTP), a structured and geopolitically relevant, enriched OSINT assessment of their operations, consisting of interpreted hacking literature, videos, and, custom made hacking tools, extensive SNA (Social Network Analysis) of the country's Hacking Ecosystem, real-life personalization of the key individuals behind the groups (personally identifiable photos, personal emails, phone numbers, Blogs, Web Sites, Social Networking accounts etc.). It's purpose is to ultimately empower decision/policy makers, as well as intelligence analysts, with recommendations for
countering Islamic Republic of Iran's growing understanding and application of CNO tactics and strategies."

Request, your, complimentary, copy, of, the, report, by, approaching, me, dancho.danchev@hush.com