Originally introduced by the Global Islamic Media Front (GIMF), the second version of the Mujahideen Secrets encryption tool was released online approximately two days ago, on behalf of the Al-Ekhlaas Islamic Network. Original and translated press release :
"Is the first program of the Islamic multicast security across networks. It represents the highest level of technical multicast encrypted but far superior. All communications software, which are manufactured by major companies in the world so that integrates all services communications encrypted in the small-sized portable. Release I of the "secrets of the mujahideen" the bulletin brothers in the International Islamic Front and the media have registered so scoop qualitatively in the field of information and jihadist exploit the opportunity to thank them for their wonderful and distinctive. And the continuing support of a media jihadist group loyalty in the technical development of a network of Islamic loyalty program and the issuance of this version, in support of the mujahideen general and the Islamic State of Iraq in particular." 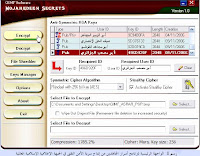 Key features in the first version : 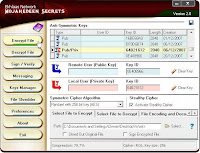 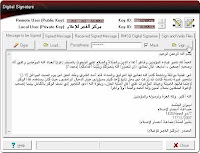 So far, Reuters picked up the topic - Jihadi software promises secure Web contacts :
"The efficacy of the new Arabic-language software to ensure secure e-mail and other communications could not be immediately gauged. But some security experts had warned that the wide distribution of its earlier version among Islamists and Arabic-speaking hackers could prove significant. Al Qaeda supporters widely use the Internet to spread the group's statements through hundreds of Islamist sites where anyone can post messages. Al Qaeda-linked groups also set up their own sites, which frequently have to move after being shut by Internet service providers." 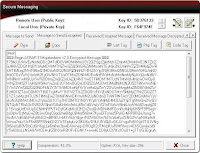 Needless to say that the new features, even the fact that they've updated the program has to be discussed from a strategic perspective. The improved GUI and the introduction of digital signing makes the program a handy tool for the desktop of the average cyber jihadist, average in respect to more advanced data hiding techniques, ones already discussed in previous issues of the Technical Mujahid E-zine. With the tempting feature to embedd the encrypted message on a web page instead of sending it, a possibility that's always been there namely to use the Dark Web for secure communication tool is getting closer to reality. Knowing that trying to directly break the encryption is impractical, coming up with pragmatic ways to obtain the passphrase is what government funded malware coders are trying to figure out. Screenshots courtesy of the tool's tutorial.
on January 21, 2008
Email ThisBlogThis!Share to TwitterShare to FacebookShare to Pinterest
Newer Post Older Post Home