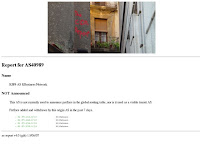 Yesterday, Paul Ferguson tipped me on the sudden disappearance of the Russian Business Network. And just like babies have different understanding of day and night, the RBN isn't interested in going to sleep too, in fact there's a speculation that they're relocating their infrastructure to China, speculation in terms of that it could be another such localized RBN operation :

"Jamz Yaneza, a Trend Micro research project manager, agreed. "We're seeing signs of RBN-like activity elsewhere, in Turkey, Taiwan and China. RBN may be moving to places even more inaccessible to the law [than Russia]. Everyone knows they were in St. Petersburg, but now they're changing houses, changing addresses. The Spamhaus Project antispam group has posted information that indicates RBN may have already laid claim to IP blocks located in China, Shanghai in particular."

It's always a pleasure to monitor the RBN, a single activity on behalf of their customers represents an entire sample to draw conclusions out of. Catch up with such activities like over 100 Malwares Hosted on a Single RBN IP, Fake Anti Virus and Anti Spyware Software, and the most recent Fake Suspended Account Messages while the IPs are alive and serving exploits and malware. Well, used to.