Detection Rates for Malware in the Wild 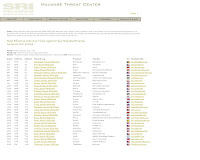 Yet another Early Warning Security Event System has been made available to the public, earlier this month. The Malware Threat Center is currently generating automated tracking reports in the following sections :

So what? In respect to signatures based malware scanning, every vendor has its 15 minutes of fame, however, as I pointed out two years ago :

"Avoid the signatures hype and start rethinking the concept of malware on demand, open source malware, and the growing trend of malicious software to disable an anti virus scanner, or its ability to actually obtain the latest signatures available."

What has changed? The DIY nature of malware building, the managed undetected binaries as a service coming with the purchase of proprietary malware tools, the fact that malware is tested against all the anti virus vendors and the most popular personal firewalls before it starts participating in a campaign, and is also getting benchmarked and optimized against the objectives set for its lifecycle. Moreover, with malware authors waging tactical warfare on the vendors infrastructure by supplying more malware variants than then can timely analyze, this tactical warfare on behalf of the malicious parties is only going to get more efficient.
- April 30, 2008
Email ThisBlogThis!Share to TwitterShare to FacebookShare to Pinterest