IM me a command, master - part two. Diversifying the command and control channels of malware is always in a permanent development phrase, with malware authors trying to adapt their releases in order for them to bypass popular detection mechanisms. IM controlled malware is a great example of such a development, and now that I've already covered a Yahoo Messenger controlled malware in previous post, it would be logical to come up with more evidence on alternative IM networks used as a main C&C interface, such as ICQ in this case. The ICQ controlled malware's pitch : 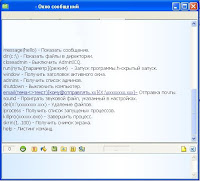 "With this program, you will always be able to access the necessary functions of your computer using ordinary ICQ. It has the opportunity to add their scripts and commands, thus becoming a universal tool for controlling the computer - it all depends on your imagination and skills. Through the program operations like the following can be run by default - viewing directories, displaying messages, lauching programs, killing processes, shutdown, view active windows, and much more."


Released primarily as a Proof of Concept, its source code is freely available which as we've already seen in the past results in more innovation added on behalf of those using the idea as a foundation for achieving their own malicious purposes.

The whole concept of abusing third-party communication applications for malware purposes, has always been there, in fact two years ago, there were even speculations that Skype could be used to control botnets. A fad or a trend? The lone malware author who's not embracing malicious economies of scale and looking for reliable and efficient ways to infect and control as many hosts as possible, is taking advantage of this, the rest are always looking for ways to port their botnets to a different C&C without loosing a single host in order to benefit from what a web application C&C can provide in respect to the old-fashioned IRCd command line commands.
on April 14, 2008
Email ThisBlogThis!Share to TwitterShare to FacebookShare to Pinterest
Newer Post Older Post Home