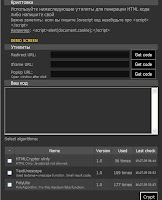 Cybecriminals understand the value of quality assurance, and have been actively running business models on the top of it for the past two years.

From the multiple offline antivirus scanners using pirated software, the online detection rate checking services allowing scheduled URL scan and notification upon detection by antivirus vendors, to the underground alternatives of VirusTotal in the form of multiple firewalls bypass verification checks - cybercriminals are actively benchmarking and optimizing their releases before launching yet another campaign. 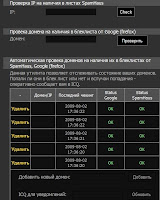 A newly launched service aims to port a universal managed malware feature on the web - the polymorphic obfuscation of malicious scripts in an attempt to increase the lifecycle of a particular campaign.

Interestingly, due to the obvious software piracy within the cybercrime ecosystem which allowed proprietary malware tools to leak in the wild, the service is using a particular malware kit's javascript obfuscation routines and is running a business model on it.

For the time being, it relies on three obfuscation algorithms, HTMLCryptor olnly - used 56 times, TextUnescape - used 109 times, and PolyLite - already used 177 times. The DIY obfuscation service, also checks and notifies the cybercriminal over ICQ in cases when his IPs and domain names have been blacklisted by Google's Safebrowsing, as well as Spamhaus, and more checks against public malware domain/IP databases are on the developer's to-do list.

The price? $20 for monthly access and $5 for weekly. Despite the fact that the service is attempting to monetize a commodity feature available to cybecriminals through the managed updates that come with the purchase of a proprietary web malware exploitation kit, it's not a fad since it fills in the DIY niche where the variety of the algorithms offered and their actual quality will either spell the doom or the rise of the service.

This post has been reproduced from Dancho Danchev's blog.
- August 04, 2009
Email ThisBlogThis!Share to TwitterShare to FacebookShare to Pinterest